We are happy to guide you through the entire exhibition in German and English. Our volunteers will give your group of up to 20-25 people an expert presentation of the exhibition.
Larger groups can be guided in several simultaneous tours. 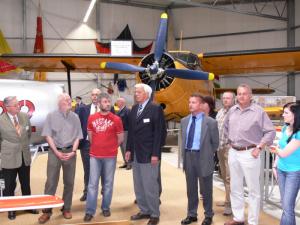 Guided tour through the exhibition

Chronologically, we show you the history of aviation, from the beginnings to the present in German and English. You will get to know our exhibits in detail

and get a lively presentation of the background history. In addition to special guided tours for small groups, international visitors and children's groups, we are happy to cater for special groups. For example, we offer suitable guided tours for the visually impaired. For children we have, among other things, a walk-in helicopter and issue a children's pilot's licence.

Note: There is a children's helicopter pilot's licence for children.

In addition to the standard guided tours, the Aviation Museum has also been offering various special tours of the Aviation Museum Laatzen-Hannover since January 2018 - on very special topics relating to aviation, in particular the history and technology of aircraft construction and flying, which are narrated and explained using the aircraft on display, aircraft models and a wide variety of exhibits in the showcases. These special tours also last up to 2 hours.

Special tour "Decelerated Flying": We don't have to fly faster, further, higher - as in competitive sports: let's get enthusiastic about pleasure flying, slow flying over land and through seas of clouds in gliders, balloons, zeppelins, historic biplanes and small sports aircraft - told and explained by a dozen such aircraft / flying machines and by means of the exhibits on them in various showcases.

Special guided tour "Famous German Aircraft Builders and Pilots": With the aircraft and other exhibits from more than 100 years of German aviation history, this museum also brings us closer to their famous manufacturers such as Hugo Junkers, Claude Dornier, Ernst Heinkel, Willy Messerschmitt and their famous pilots such as Ernst Udet, Elly Beinhorn, Hanna Reitsch. What do these aviation pioneers mean to Germany and the world today?

Special guided tour "Flying adventures around the world": With the help of several aircraft, aircraft engines and many historical exhibits in the showcases, we experience adventurous flights around the world.

from the Pole Route to the South American Route, in the Caribbean and the Philippines, in Central Africa and on Bornholm - and with "Graf Zeppelin" around the world.

And in the process, we also get to talk about books and films that recount all this for us.

Special guided tour "Mach 2": Flying supersonically - since the 1950s already with "Mach 2", twice the speed of sound. The explanation of the engines and airframes that made this possible,

and airframes that have made this possible, we get into the nitty-gritty of physics and technology. But even the layman can see the flying speed of the Mach 2 jet fighter "Lockheed F-104 G" and the numerous models of civilian and military supersonic aircraft in the museum....

If you have any questions, simply send us a e-mail.